Kleisli composition and other fishy operators

In this article I would like to introduce you to two common composition operators and explain some of their utility, using first a made up example, and then an example from the real world. These operators are all about composing functions of slightly weird types. For while regular function composition combines functions of types a -> b and b -> c, these guys concern themselves with combining functions of types which don't naturally fit perfectly together. 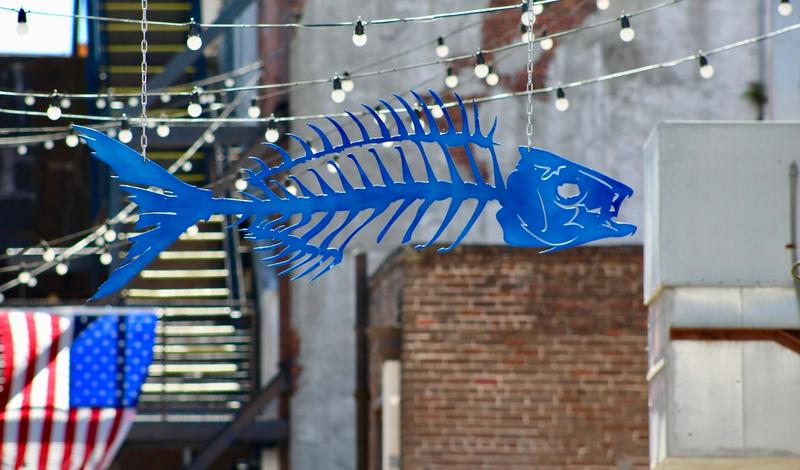 The Kleisli arrow is often written using the fishbone operator. f >=> g is the Kleisli composition of the functions f and g with the following abstract types.

If we consider lists of numbers as a concrete example, the types would be

and their composition would also have the type Int -> List Int. Such a function might for instance be the square root function, such as

If you're using complex numbers you can also consider the n'th root function, where it will produce a list of n roots.

The function doubleSquareRoot which takes the square root of a number twice can be defined as the Kleisli composition of this square root function with itself.

To understand what doubleSquareRoot 16 will evaluate to, we will first consider the first sqrt evaluation. sqrt 16 will produce [4, -4]. For each of the results in this list, the next sqrt function will be evaluated:

These results are then consolidated to produce the final result.

This technique can be used to chain together many computations to produce a larger result. When thinking about lists this can be understood as modeling problems with many results such as finding roots, or maybe finding the possible next moves in a graph traversal problem.

At work we have recently been experimenting with using F# for a simple web api. An endpoint might look like

This constructs a larger function using the regular >> function composition operator. The input for this function will be a context object which contains the body of the HTTP request as well as a reference to the database, which the Service uses.

We use Result.map to handle errors along the way using the built-in Result type. For instance getBody might fail if the incomming JSON cannot be parsed as a Models.WriteModel type. The Result.bind function reveals that the Service.updateEvent function itself may fail and produce a Result.Error.

This seems like it will work, until you consider which functions needs use of the context object. getBody obviously needs the context to access the HTTP body. In addition, both Service.updateEvent and commitTransaction needs a reference to the database. The way we solve this is to consider Service.updateEvent id not as a function from the domain model to Result<DomainModel> but as a function from the domain model to ctx -> Result<DomainModel>. That is, a function which takes domain models and produce domain models and can fail but also needs a context. That might sound and indeed be confusing, but if you don't think too much about it, it kind of makes sense. Using Kleisli composition's closely related cousin the bind operator >>=, we can rewrite our function.[0]

If you're interested, the bind operator may be defined as follows.

It might be difficult to see the similarities between functions that produce lists of things and functions that produce functions which need contexts, but they are there. They have some similar properties and can be understood in the same way. And of course, if you don't need to, you don't have to think too much about it to be able to use composition operators such as the bind and Kleisli arrows effectively.

[0]: It is well known that monads don't compose, and both Result and functions which need contexts are monads. This is only a problem if you're trying to write code that works generically with two different types of abstract monads, and this is where people use monad transformers. However, we only need these specific, concrete monads, which allow us to write a single >>= bind operator which handles all of our needs.