The Power of Habit: Key takeaways

In his book Charles Duhigg explains what a habit is, what building blocks it consists of and how it influences us as individuals, businesses and society. 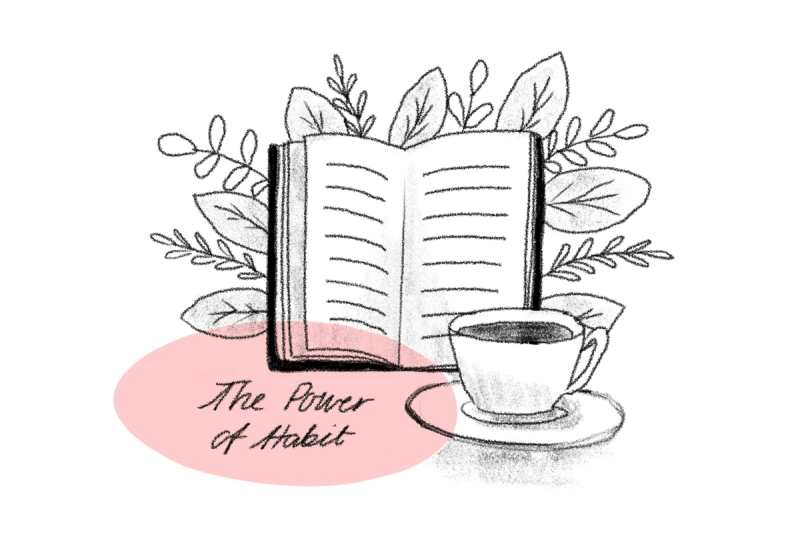 Earlier this year, I came across a list of top 100 behavioural design books, with tips on many good reads! Here are my takeaways from the book «The Power of Habit» by Charles Duhigg.

What is a habit?

Every time we learn or do something new, we use a lot of conscious mental energy to do it right. To avoid information overload, the brain creates automatic patterns of behaviour by learning the sequence of actions it takes to do something. The brain then stores the sequence of actions to do it automatically the next time. According to Duhigg, more than 40% of daily behaviours are automatic habits.

Habits consist of a cue, a routine and a reward

For a habit to become automatic you need a cue to signal the starting point that turns your brain into automatic mode for the routine, which is the sequence of actions. A reward signals the end of the habit and increases the dopamine levels (happy hormone) in the brain.

The more frequent the habit, the more dopamine is released during the habit’s cue as the brain expects to receive the reward. This encourages you to engage in the behaviour, and if you don’t get the reward, you’ll feel disappointed when dopamine levels drop.

How do you change a habit?

While you cannot delete automatic patterns in the brain, it is possible to change them. To do so, you need to experiment to understand what is the cue and the reward that are driving the habit. First, document the routine by writing down all the steps of actions. Then, identify which reward you’re craving by changing the reward. Finally, try to figure out what type of cue triggers the habit. It can be a specific location, time, emotional state, other people or something that happened right before. Once you know the cue, routine and reward, you can make a plan to overcome temptations in the future by triggering new behavioural routines for the new reward.

Trying to address or tackle several automatic routines at once is hard and will in many cases end in failure. One way forward is to start by changing one core habit. The perceived benefits of changing one habit will encourage you to change more habits or develop new good ones.

Managers and employees need automatic routines to get things done instead of questioning everything they do. Individual habits accumulate and become the business’ collective habits that after a while will become part of the culture.

As time goes by, people will act out automatic routines without knowing why, and being unaware of these automatic routines can lead to the adoption of unconstructive habits. The business' priorities and its value proposition evolve over time, so collective habits must also evolve to align the organisation’s goal. People tend to resist change to save energy, but the transition to new collective habits can be made easier by letting managers and employees understand why they need to change behaviour.

All large movements with impact on society have, according to Duhigg, been fuelled by social habits. It usually starts with the social habit of people trying to help a suffering friend. Furthermore, social ties between acquaintances build up a social pressure to join, and people start identifying with the movement, taking on the new social habits to reflect their belief. One example is how Rosa Parks, a woman with a large social network, sparked the civil rights movement by refusing to give up her bus seat to a white passenger. When she was arrested, her network of friends and neighbours started the Montgomery bus boycott.

If you followed me this far and found it interesting, I recommend you read the whole book to dive deeper into the material and to get some awesome examples! It is one of the best books I've read so far.