How I stopped worrying and started to love holding presentations.

I had been working as a developer for a good 12 years when I was approached by my manager, and asked if I could assume the position of team lead for a while.

I was humbled to be asked - however the mere thought of performing some of the tasks required by someone in that position in that particular setting was very frightening. 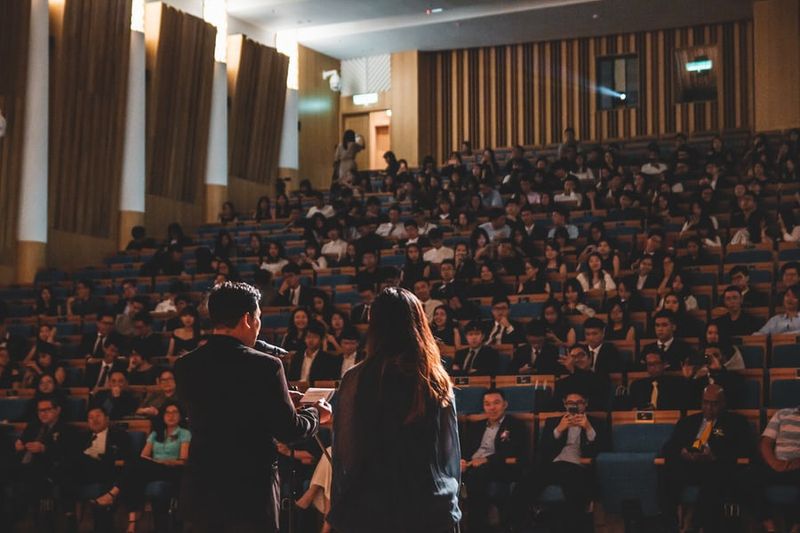 I had been working with the former team leader, who left on maternity leave. She had to perform public speaking in different situations. One were the daily standups where a relatively small group of coworkers briefly discusses their various day-to-day tasks. To be in charge of this, and make people listen to you, felt somewhat more challenging than just be one of the contributors to the standup.

Moreover, the team lead also had to do a bi-weekly priority meeting, with a few more participants. This required a lot more preparation, and a lot more focus on the team lead, who would have to steer in the meeting in the right direction.

And if that wasn’t the worst part of it - every three weeks the team lead had to perform a demo where everyone in quite a big organisation was invited. The demos had routinely attracted a full auditorium consisting of something like 200-300 people.

Mostly because of this, I turned the offer as team lead down. Leaning back to do what I was already doing - developing software safely in front of my own computer - was much preferable to this.

I told my spouse that I got this opportunity - and she pointed out that while it maybe felt right at the moment to turn this down, I had maybe forfeited the chance to be asked again.

After a couple of days my manager told me that he had found no other suitable successors, and actually asked me again! A bit out of sense of duty I accepted.

As goes for most people, I dreaded holding any form of presentation, all eyes on me.

First there was the standups. This felt a bit uncomfortable at the beginning, but people were focusing and the meetings were over pretty fast with minimal interference by me. I got routined quite quickly - learned to crack a couple of low-key jokes every now and then, and playing with the order the participants introduced their daily works and challenges helped to relieve a lot of the tension.

The priority meetings was a bit more challenging, but just a bit - after a while I found similar ways to look forward to these in the same ways as standup.

So cue the big demos.

They were held on a Friday morning - the Thursday nights before I hardly slept at all due to the stress of standing on the stage with hundreds of pairs of eyes looking at me.

There were a couple of times where everything just went down the drain.

Once we were supposed to demonstrate some functionality, and the two teams presenting right after us were dependent on our functionality actually working.

Guess what - it didn’t, due to an ancient version of Firefox on the demonstration machine every team had to share for their demos.

Another time I actually got a message from a developer on my team which simply stated “Nothing is working.” Very comforting message to get.. I just went with my usual poker face, said with as little emotion as possible to the audience - “sorry, nothing is working, we have to show you this in three weeks instead”.

However, even if these weren’t exactly good and comforting experiences, I eventually felt very confident after performing these enough times.\ So we screwed up a couple of times - big deal.

“What is the worst that could happen?” Well, as we have read, all the work you have planned to show could stop working. In the long run, no one really remembers this.

I have some tips to reduce nervousness before a presentation.

I have found out that these works for me, your mileage might vary.

I try to tell (at least one) joke every presentation. The bar is surprisingly low in such a setting, and it makes me look just forward to telling it.

It does not have to be something who would be a candidate for Best Comedy award - for instance making some testdata with quirky names might be enough.

One I just made a lot of test data with a made-up story of how I as a test person could be in that situation, and - well, I guess you had to be there to find it funny, but it made it much easier for me, the presenter, and that is the point.

The most important advice is practice and not taking yourself too seriously, which is easy to say, but comes.. with practice.

Now I can honestly say that I have little to zero negative thought about holding a presentation at any time.